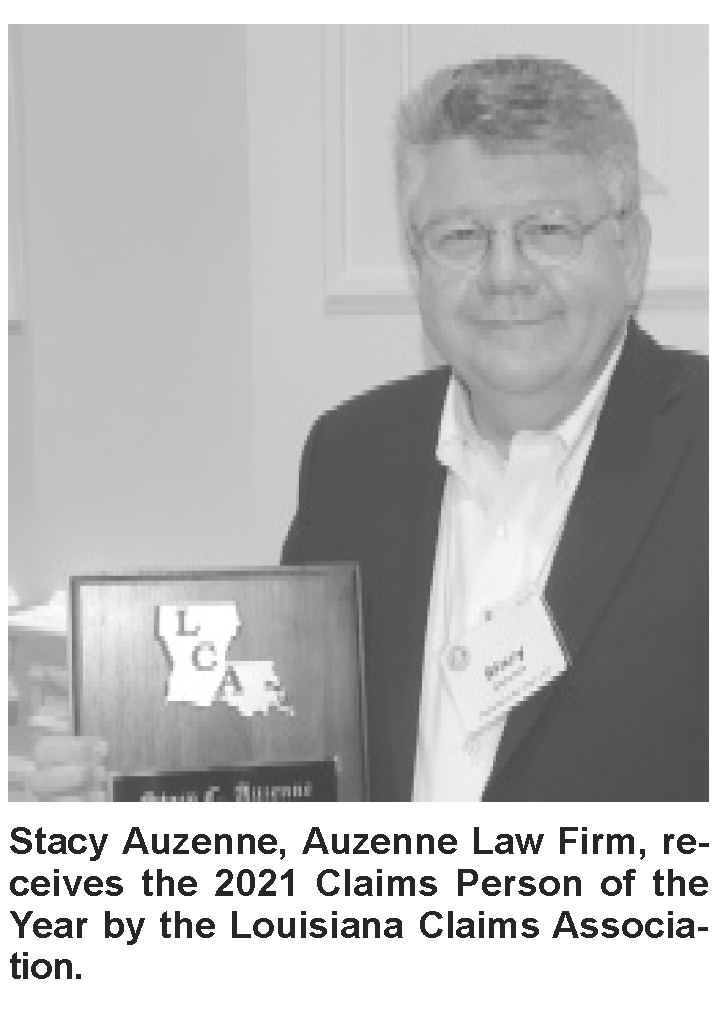 Stacy C. Auzenne, a defense attorney from Alexandria who handles workers’ compensation cases, has been named Claims Person of the Year by the Louisiana Claims Association. The announcement was made during LCA’s 27th Annual Education Conference and Trade Expo held June 7-9 at the Crowne Plaza Hotel in Baton Rouge.

A solo practitioner, Auzenne admittedly was caught unaware when his name was announced as the recipient of the LCA award. While he has been doing workers’ compensation defense for most of the 30 years he has practiced law, his firm, Auzenne Law Firm LLC, is a general practice entity.

A Baton Rouge native, Auzenne earned a bachelor’s degree in business administration with a focus on accounting in 1988 and worked for the City of Baton Rouge for a year. He was a budget analyst; his job was to project the city’s next year’s budget based on information available this year.

Subsequent to working for the City of Baton Rouge, Auzenne attended Loyola University New Orleans School of Law where he received a Juris Doctor degree in 1992 and was admitted to the bar in 1993. After obtaining his degree, Auzenne clerked for the federal magistrate, John F. Simon, in Alexandria, then Auzenne went to work for the Gold, Weems Law Firm. He later worked for Bolen Erwin and Johnson where he was involved in municipal defense. Among its many clients, the firm represented the City of Alexandria in a lawsuit brought by former officers and directors of a defunct insurance company. Next, Auzenne worked at Walker, Passman and Michiels, which numbered among its clients the City of Alexandria, Louisiana Pacific and the Hartford. At this point, Auzenne started doing more in the workers’ compensation area.

Auzenne has been on his own practicing law since Jan, 1, 2005, when he and his two partners decided to each go their own way.

He is a past president of LCA and has been on the board of directors since 2008 as a representative of the Central Louisiana Claims Association, where he currently serves as president.

“When folks are not working, they are not getting hurt,” Auzenne told the Reporter. The result is that claims came from heavy industry, nursing, nursing homes, truckers and heavy manufacturing – the industries where work was ongoing.

Initially, workers who were in lockdown received unemployment compensation, and later, federal compensation was added. So far, comp has not picked back up, he said. “Until folks are back to work at a full tilt boogie,” handling workers’ compensation will consist of dealing with “old stuff” – tying up loose ends and settling old cases.

Settling cases during the pandemic has been by teleconference, and in 2020 there was only one judge in Alexandria who handled workers’ comp cases.

“Zoom is wonderful,” Auzenne said, “but all the participants have to have a certain bandwidth.” There were claimants who would try, but if they did not have enough bandwidth, the connection “would sputter in and out.” Because of insufficient band width, Auzenne said he had a settlement and a couple of depositions fall through. The whole process worked better if his clients could come to his office for the teleconference.

In addition to Louisiana, Auzenne is admitted to practice before the U.S. Supreme Court; U.S. Court of Appeals, Fifth Circuit, and U.S. District Court, Eastern and Western Districts of Louisiana.

Recently Auzenne was appointed to Loyola University’s board and is on the board of the Louisiana Association of Defense Counsel.

Auzenne is a past president of the Alexandria Lions Club, a member of Ducks Unlimited and Knights of Columbus.