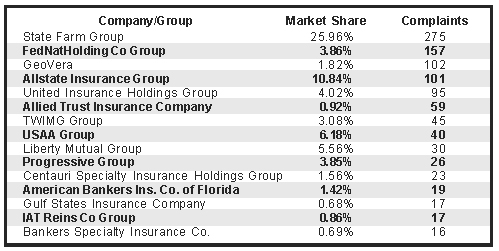 The Louisiana Department of Insurance has received 1,497 complaints concerning the three hurricanes that struck the state last year and has recovered $41 million on behalf of those consumers as of April 30, Louisiana Insurance Commissioner Jim Donelon said May 20 in a news release.

“Our dedicated hurricane complaint unit is all about getting consumers the answers they need and the money they deserve in the aftermath of the storms,” Donelon said. “At this point, people are turning their attention to the fast-approaching 2021 hurricane season, but we haven’t forgotten about those still struggling after the 2020 season. Wherever you are in your insurance claim process, we want to help if you’re having issues with your insurer.”

Investigations by the LDI’s Consumer Services Office often prompt an insurance company to take a second look at a claim and generate payment. Last fall, the LDI formed a special unit within the Consumer Services group to exclusively work on hurricane complaints.

The creation of a dedicated hurricane complaint team is a key component of the LDI’s efforts to assist policyholders affected by hurricanes Laura, Delta and Zeta. Staff from the LDI’s Consumer Advocacy Office spent six weeks last fall working at a recovery center in Lake Charles to help consumers read their policies and file storm claims, and the Consumer Advocacy group returned to Lake Charles in April to again help policyholders. Meanwhile, the LDI has issued three bulletins to industry alerting companies about bad faith and improper claims handling that can trigger having penalties added to claims that are improperly handled.

When the LDI receives a complaint, trained specialists listen to a consumer’s account of a problem, contact the company on the complainant’s behalf, investigate the situation, and determine whether the company has complied with Louisiana law and the provisions of the consumer’s policy. Most complaint inquiries are completed within 30 days. If a larger pattern of complaints is observed, it can trigger a broader investigation of a company known as a market conduct exam.

As of March 31, Louisiana insurers had received 311,266 claims for all lines of insurance from hurricanes Laura, Delta and Zeta. Although insurers label 85 percent of those claims as closed, Donelon encourages policyholders to file supplemental claims for payment if they are dissatisfied with the amount of money they have received. Consumers can file as many supplemental claims as needed until their properties are rebuilt, subject to any time limits contained in their policies or Louisiana law.

As of April 30, policyholders had filed 1,145 complaints about Hurricane Laura, 206 complaints related to Hurricane Delta, and 146 complaints concerning Hurricane Zeta. About 77 percent of these complaints are in regard to homeowners policies.

The 15 insurers with the highest number of homeowners complaints are listed in the accompanying table. For more information visit www.ldi.la.gov.