Manalla and Babin receive awards from The 1752 Club

Leeann Manalla, SageSure Insurance Managers, is the 2021 recipient of the 1752 Club’s Insurance Woman of the Year award. 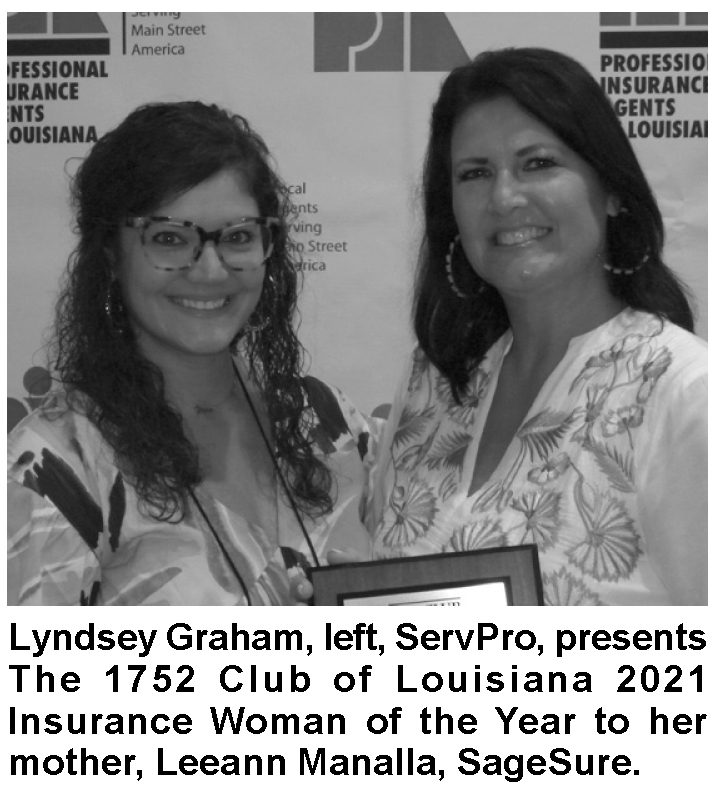 She later worked for Central Claims Service, where she and a co-worker implemented an adjuster leasing program. After her time at Central Claims Service, Manalla worked for a Florida company which also did adjuster leasing. When that company withdrew from Louisiana and wanted her to move to Florida, she took a job with Crawford and Company. The Crawford and Company job lasted until after Hurricane Katrina when the adjusting firm no longer needed a sales person in Louisiana to market its services.

Still in marketing, Manalla’s next job was with Occidental Insurance Company. She joined SageSure in 2013, which represents Occidental and other insurance companies.

Manalla is a past president of The 1752 Club and the New Orleans Claims Association, and is active with the PIA of Louisiana, the Independent Insurance Agents and Brokers of Louisiana, (IIABL), the Young Insurance Professionals (YIPs) and the Young Agents Committee of IIABL.

She is a graduate of Southeastern Louisiana University with a degree in marketing. In addition, she has the CPIA designation.

In 2017, The 1752 Club presented Manalla with the Jim Herndon Company Representative of the Year award.

Her boss at the time at SageSure said, “She stops at nothing to ensure our clients are successful.”

The former director of Louisiana operations for IAT Insurance Group, David Cruikshank said, “Through my 46 years of working in our industry I have traveled with many marketing people, but you were the best. …What I observed firsthand was you often knew everyone in the agency, but more than that truly cared about everyone’s well-being. People can trust you, and it is this trust that has made us, and you, successful in Louisiana.”

She is a past recipient of the Inspire Optimism award from SageSure Insurance Managers.

Manalla’s award was presented by her daughter, Lyndsey Manalla Graham, ServPro of Metairie. 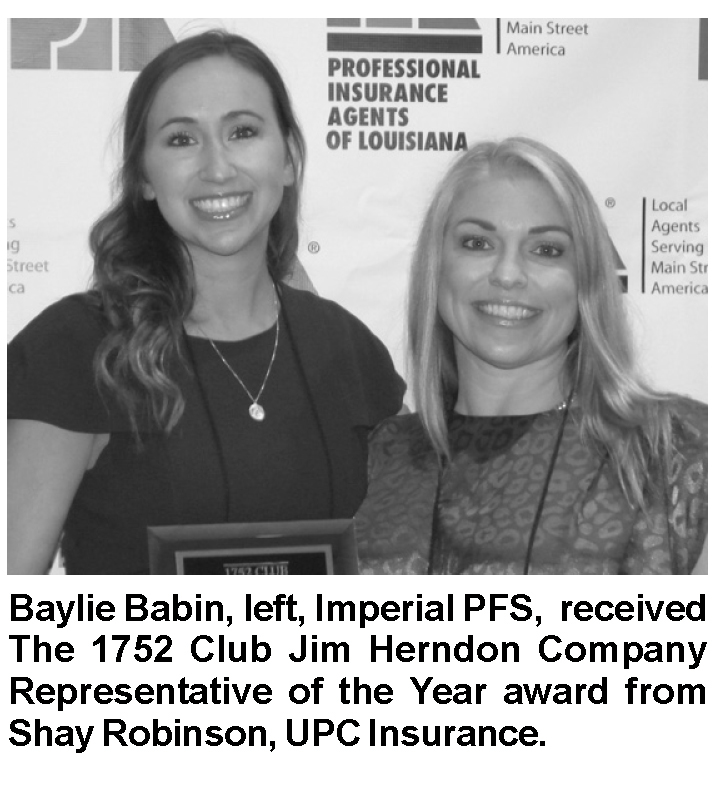 Baylie Babin, Imperial PFS, was the recipient of the Jim Herndon Company Representative of the Year award.

She serves on the board of directors for YIPs and is also active with The Insurance Professionals of Greater New Orleans, where she serves as co-chair of the arrangements/registrar committee.

She is a graduate of Southeastern Louisiana University with a degree in marketing. In addition, Babin has the CISR and CPIA designations.