Kerry Sullivan has retired from his position as deputy commissioner for hearings for the TDI Division of Worker’s Compensation. Sullivan joined the DWC in 2013, having previously served with the State Office of Administrative Hearings, as administrative law judge from 1995 to 2008, then as general counsel from 2008 to 2012. As deputy commissioner, Sullivan oversaw reorganization of hearings staff, modernized dispute procedures, revised dispute proceeding documents and webpages, and transitioned the hearings to virtual proceedings during the pandemic. Replacing Sullivan as deputy commissioner is the current director of hearings, Allen Craddock. Craddock graduated from St. Mary’s University School of Law and was admitted to practice by the State Bar of Texas in 1998. In 2009, he completed a Ph.D. in social psychology. He is board certified in Workers’ Compensation Law by the Texas Board of Legal Specialization. Prior to joining DWC in 2013, he practiced fulltime in worker’s compensation representing medical providers, injured workers, and employers. He has served as an adjunct professor at St. Mary’s University School of Law since 1999, and also served as a visiting professor of law at Pepperdine University.

Kim Hutson has joined the IIAT staff as agency advantage coach. Hutson has been an owner of a small agency for over 20 years in Plano. She has gone through the experience of perpetuating the agency from her father and then building upon that business for years. She has been through an acquisition process and eventually stepped away for a couple years to take care of her parents. “Her expertise will be an incredible asset to IIAT members who are seeking advice and have questions about the day-to-day challenges they face,” said IIAT President and Executive Director Marit Peters. In her role as agency advantage coach, Hutson will serve members who have questions and need immediate responses. “IIAT was a key part of my growth as an agency owner. I took advantage of the many benefits and opportunities they offer. I am beyond excited to work at IIAT and use my experiences to move our members forward to maximize their potential.” Hutson is a Certified Insurance Counselor (CIC) and holds a Bachelor of Business Administration from the University of Texas at Dallas.

Marit Peters, president and executive director of the Independent Insurance Agents of Texas, is continuing the Mornings with Marit webinar series to help IIAT members develop and maintain management and leadership skills. Each program is about 40 minutes to one hour in length. In May, Peters discussed how to create an engaging website with Mike Stucco, with Mighty Citizen, the firm that recently revamped the IIAT website. On June 30, Peters will interview Jim Gavin, as he retires from his position as director of information services for IIAT. All of the programming for Mornings with Marit is available live and by replay, with registration required for the live views. 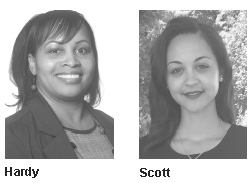 New elected officers of the Dallas/Fort Worth Chapter for the National African-American Insurance Association for the 2021-2023 term were announced on June 2. Sherita Hardy, Amwins Group, was elected president, and Krista Scott, Travelers, vice president. Hardy succeeds Immediate Past President Tiara Morris, Chubb, who served as an officer of NAAIA-DFW since 2016. Hardy is a founding member of the NAAIA-DFW chapter and immediate past membership co-chairwoman. She has worked in the insurance industry since 1998. Currently, she serves as assistant vice president of marketing with Amwins in Dallas. Her early years in insurance were as a customer service representative with Scarbrough, Medlin and Associates in Plano. Scott is an inland marine underwriter with Travelers in Dallas. She earned a B.A. in mathematics with emphasis in actuarial science in 2016 from Millikin University, Decatur, Illinois. Scott served last term as public relations chairwoman for the Dallas/Fort Worth Chapter.

The Houston Insurance Professionals will host its annual fundraiser Christmas in July on July 29 at the Saltgrass Steakhouse, from 6 p.m. to 9 p.m. The event will include a silent auction, door prizes, a liquor raffle and a left-right game, with all proceeds benefitting HIP community charities. Reservations are required at $40 per person. Send payment to HIP c/o Harco Insurance, 10777 Northwest Fwy, Ste. 700, Houston, Texas 77092, or contact Daphne Clark to arrange a credit card payment, dclark@hiallc.com. (No credit card numbers in the email message, please.) Liquor wagon tickets can be purchased from HIP members prior to the event; winner need not be present to win. To participate in the left-right game, attendees must bring a wrapped gift, valued at a $20 maximum. Contact Clark to arrange sponsorships and donations.

The Independent Insurance Agents of Houston will host the association’s annual Charitable Sporting Clays Invitational on Friday, Aug. 6, at the Greater Houston Gun Club. The day starts at 8 a.m. with registration and breakfast, and includes safety training, shooting, lunch and awards. The event will benefit Brookwood Community, Camp Hope and Company OnStage, area charities that serve adults with disabilities, combat veterans suffering from combat-related PTSD, and community theater classes and performances by children and adults. One person shooter registration is $375; a four-person team is priced at $1,500. Participants can expect 72 clays per shooter, with 12 and 20 gauge ammunition provided. New games for the event include gun powder golf and four-person flurry. IIAH’s event offers several sponsorship opportunities. For more information, abenavides@iiah.org.

According to NU Property Casualty 360°, as of mid-May there were 120 cases on appeal, in both state and federal courts, that allege insurance companies wrongfully denied coverage for pandemic-related business interruption claims. Lawyers are awaiting rulings from the Ohio Supreme Court, the District of Columbia Court of Appeals and the Oklahoma Supreme Court, as well as the U.S. Court of Appeals Ninth Circuit and Eighth Circuit. Nearly 1,700 lawsuits have been filed by businesses against their insurers, which denied claims for business interruption coverage submitted after state and local government officials ordered lockdowns throughout the country last year. Most judges, particularly in federal courts, have sided with the insurers, which have insisted that Covid-19 did not result in a physical loss or damage to their properties, as required under the policies. But some courts have sided with policyholders, leaving businesses a window of opportunity to pursue the claims further.

On May 18, the U.S. Senate Committee on Banking, Housing and Urban Affairs held a hearing on the reauthorization of the National Flood Insurance Program. The National Association of Professional Insurance Agents submitted testimony urging the committee to pass a long-term reauthorization. The NFIP’s most recent five-year reauthorization expired on Sept. 30, 2017. Since 2017, the NFIP has been subject to a total of 16 extensions of varying lengths, and some of the shortest extensions resulted in three brief NFIP lapses within a three-week period in early 2018. The NFIP’s current authority expires on Sept. 30, 2021. According to PIA, this relatively early attention to the NFIP by the Senate Banking Committee is a positive sign that this Congress may try to pass a long-term reauthorization before the NFIP’s expiration later this year.

On May 28, the Surplus Lines Stamping Office of Texas published an eNews market report on the excess and specialty market in Texas. The report documents the increase in surplus lines premium volume which is outpacing policy counts, suggesting that the amount of premium per policy has driven the premium increase. The report notes that at the end of 2020, the 10 largest writers of E&S premium in Texas increased their direct written premium by 10.5 percent over 2019. SLTX also reports that each of the top 10 carrier groups had better loss ratios in Texas in 2020 than they experienced over the most recent three years. SLTX’s staff analysis used data from AM Best as well as data collected from Texas surplus lines agents. This report is available on the SLTX.org website.

The Stamping Office recorded a record-breaking $884.75 million in premium for May, with a total of $3.63 billion, year-to-date. This is a 14.5 percent increase in premium for May only, comparing 2021 to 2020, and a 14.2 percent increase year-to-date. May 2021 is the largest single month premium total ever reported in SLTX’s 33-year history, exceeding the $772.88 million record set in May 2020 by nearly $112 million. May premium also exceeds SLTX’s most recent record breaking month, March 2021, by more than $7.0 million. Lines showing the most notable growth, comparing May 2021 to May 2020, were Excess/Umbrella and Commercial Auto Liability, notes SLTX in its June 7 eNews, adding that single month comparisons do not indicate a market trend. On the fee income side, stamping fee collections are continuing a downward trend as a result of halving the stamping fee for policies written as of Jan. 1 this year. As of May 31, stamping fee collections totaled $3.39 million, which is down 29.0 percent compared with the same period last year.

According to Business Insurance, the Climate Prediction Center of the National Oceanic and Atmospheric Administration forecast an above-normal Atlantic hurricane season with a likely range of 13 to 20 named storms, and London’s Tropical Storm Risk sees 18 named storms in 2021. Fitch Ratings Inc. said that while it currently has a stable rating outlook on the property and casualty and global reinsurance sectors, losses from the predicted above-average hurricane season could change that. “Accelerating property premium rate changes promote improving underlying performance in the sector,” said Fitch. “Industry capital strength remains very strong, [but] a confluence of large events may lead to capital reductions and ratings pressures.” There is an “elevated” chance of landfall in 2021, said Fitch, after six storms at hurricane intensity made landfall on the U.S. Atlantic or Gulf Coast in 2020.

S&P Global Market Intelligence reported in early June that Karen Clark and Co. said that insurers and reinsurers sustained significant insured losses in the first quarter, mainly driven by winter weather in February that paralyzed parts of the southern United States, particularly Texas. The unprecedented winter weather in Texas and nearby states had been expected to deal insurance and reinsurance losses of at least $18 billion. Meanwhile, AccuWeather Founder and CEO Joel Myers estimated total damage and economic loss of between $45 billion and $50 billion. However, Jefferies Analyst Philip Kett suggests that even though property and casualty claims are high, severity is still uncertain. He said there is some anecdotal evidence that severity is “relatively low,” with policyholders retaining a larger proportion of claims, lessening the cost to underwriters. RenaissanceRe Holdings Ltd. CEO Kevin O’Donnell said Texas insurers tend to have lower attachments on their reinsurance programs, which could lead to a greater proportion of the industry loss being shared with reinsurers than in a similar-sized loss in a different region.

The Texas Department of Insurance has adopted the National Council on Compensation Insurance (NCCI) filing Item B-1438—Revisions to Basic Manual Classifications for Oil and Gas Field Operations. Item B-1438 revises some class code descriptions for the oil and gas industry for flow-back and drill site preparation services. Item B-1438 applies to policies effective on and after July 1, 2021.

TDI has adopted amendments to rules changing continuing education requirements for agents and adjusters, including expanding the list of approved course topics and allowing CE providers to award electronic certificates for course completion. The new rule also clarifies that agents who sell annuities must get eight hours of CE related to annuities each two-year period. The new rule became effective June 15 and is available on the TDI website.

On May 25, TDI issued a data call for information from certain insurance companies writing property insurance in Texas during calendar year 2020. The information will be used by the Texas Windstorm Insurance Association to calculate participation shares if assessments become necessary in 2021. Responses are due by June 30, 2021. Data reports must be filed by commercial property insurers and farm mutual insurers who act as fronting insurers, as defined by the Texas Insurance Code. Insurers must complete the data call using a fillable PDF form provided by TDI and remit it electronically, then file an affidavit separately that attests to the truth and accuracy of the data.